The Most Thankful Person Who Ever Lived 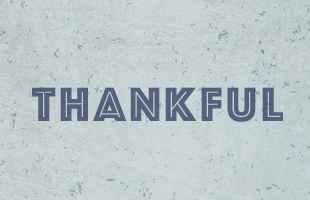 Believers often meditate on the love, the joy, and the peace of Jesus. However, most of us probably do not give enough attention to the thanksgiving of Jesus. One of the things that we can be certain of--concerning all of the sinless perfections of incarnate Son of God--is that Jesus expressed full and unceasing gratitude to His Father for every provision, every kindness, every protection, every soul-strengthening support and every miraculous act that the Father worked through Him during His earthly ministry. Without doubt, Jesus is the most thankful person who ever lived. And yet, while we may safely be assured of this, there are only a few instances in which the Scriptures tell us about the thankfulness of Jesus. This should strike us as strange, given all that the Scriptures teach us about our own need to be thankful.

Thankfulness--and a sinful lack of it--is one of the foremost teachings of Scripture. Though there are so many other passages, consider the teaching of Psalm 107, Luke 17:11-19 and 2 Timothy 3:2 in this regard. So, what are we to make of the fact that there are actually very few instances in Scripture that reference the thankfulness of Jesus? And, what can we then learn from the Scriptural record of the instances of His thankfulness? In his sermon "The First and Last Supper," Sinclair Ferguson points out that Jesus' emotional life was not always evident to us because He did not "let His emotions all hang out." He explained:

"If you read through the Gospels you will learn a great deal from the Gospel testimony to the character and attractiveness of the Lord Jesus Christ. Occasionally, you will see His inner emotional life coming to expression. Occasionally, in a deep sense of truly righteous anger. On occasion, in the tears that flow from His eyes. And very rarely in the way our modest Lord Jesus Christ did not let His emotions all hang out."

While there is a reservedness on the part of Jesus in revealing all of His emotions, the Gospel writers have recorded several instances in which Jesus verbalized thanksgiving to His Father. They can be found in Matt. 11:25; 15:36; 26:27; Mark 8:8; 14:23; Luke 10:21; 22:17, 19; John 6:11, 23; 11:41 and I Corinthians 11:24. What is remarkable about these instances of thanksgiving is that they can all be placed into one of three categories; and, each of these three categories are bound up in or related to the work of redemption. In short, Jesus' thankfulness teaches us to pour out our own hearts in thanksgiving to God--above all, for the redemption that He has freely given to us in the Son. Jesus' prayers of thanksgiving fall into one of the following three categories:

1) Thankfulness for the miracles that served the purposes of redemption. The Apostle John leaves us the record of Jesus offering thanks to God prior to performing two of His most noteworthy miracle--the miraculous feeding of the 5,000 (John 6:11), and the raising of Lazarus from the dead (John 11:41-42). With regard to the first, we might be tempted to conclude that Jesus merely gave thanks for the meal that He and His disciples, together with the multitude, were about to eat. However, the fact that it is the last thing we read before He performed the miracle, and the only other instance of Jesus giving thanks in John's Gospel is immediately prior to raising Lazarus from the dead, shows that it is gratitude--not for the common provision of food--but for the miraculous sign pointing to His glory as the only Redeemer of men. In other words, Jesus gave thanks for the Father working the miracle through Him so that men would believe in Him. This becomes all the more clear as He exposits the true purpose of the feeding of the multitude--claiming that He was "the bread which came down from heaven to give life to the world." The same is true with his giving thanks prior to raising Lazarus--a miracle that accompanied his declaration that He Himself is "the resurrection and the life."

2) Thankfulness for God's sovereignty in the redemption of men. The next thing for which Jesus offered thanksgiving is recorded in Matthew 11:25 and Luke 10:21. Just before calling men to come to Him and find rest for their souls, Jesus thanked His Father for "hiding these things (i.e. the things of the Gospel) from the wise and prudent and revealing them to babes." Jesus was thankful for God's sovereign work in the redemption of men--in His sovereign regeneration and illumination of their minds and hearts in revealing Christ to them. Jesus was thankful that the Father hid the truth of the Gospel from men and women who thought that they were wise and who rejected His claims. Jesus thanked His Father for election and reprobation.

3) Thankfulness for the fulfillment of redemption in His sufferings. Finally, Jesus thanked His father for His own sufferings. This might strike you as strange to hear, since we read of Jesus' soul sufferings in the Garden of Gethsemane, hear His cry, "Father, if it is possible, let this cup pass from Me" and listen in astonishment as He writhed in anguish, crying, "My God, My God, Why have You forsaken Me?" However, on the night of His betrayal, Jesus took bread and wine and--taking up each of these symbols of the sufferings that He was about to endure--He "gave thanks." Jesus thanked His Father that His body would be broken and His blood would be shed. The writer of Hebrews tells us that Jesus, "for the joy set before Him, endured the cross." Jesus knew that His sufferings were substitutionary and that they would bring many sons to glory. Jesus drank the bitter cup that was placed prospectively before Him in the Garden because, as John Maclaurin so astutely observed, "he had a still greater aversion to (His people having to drink it), than to drinking of it Himself." Jesus thanked His Father for the hell that He would endure on the cross because He knew that it would result in the redemption of those that the Father had given to Him. In short, the three things for which Jesus expressed thanksgiving were all bound up in the work of redemption.

The Annulment of Condemnation