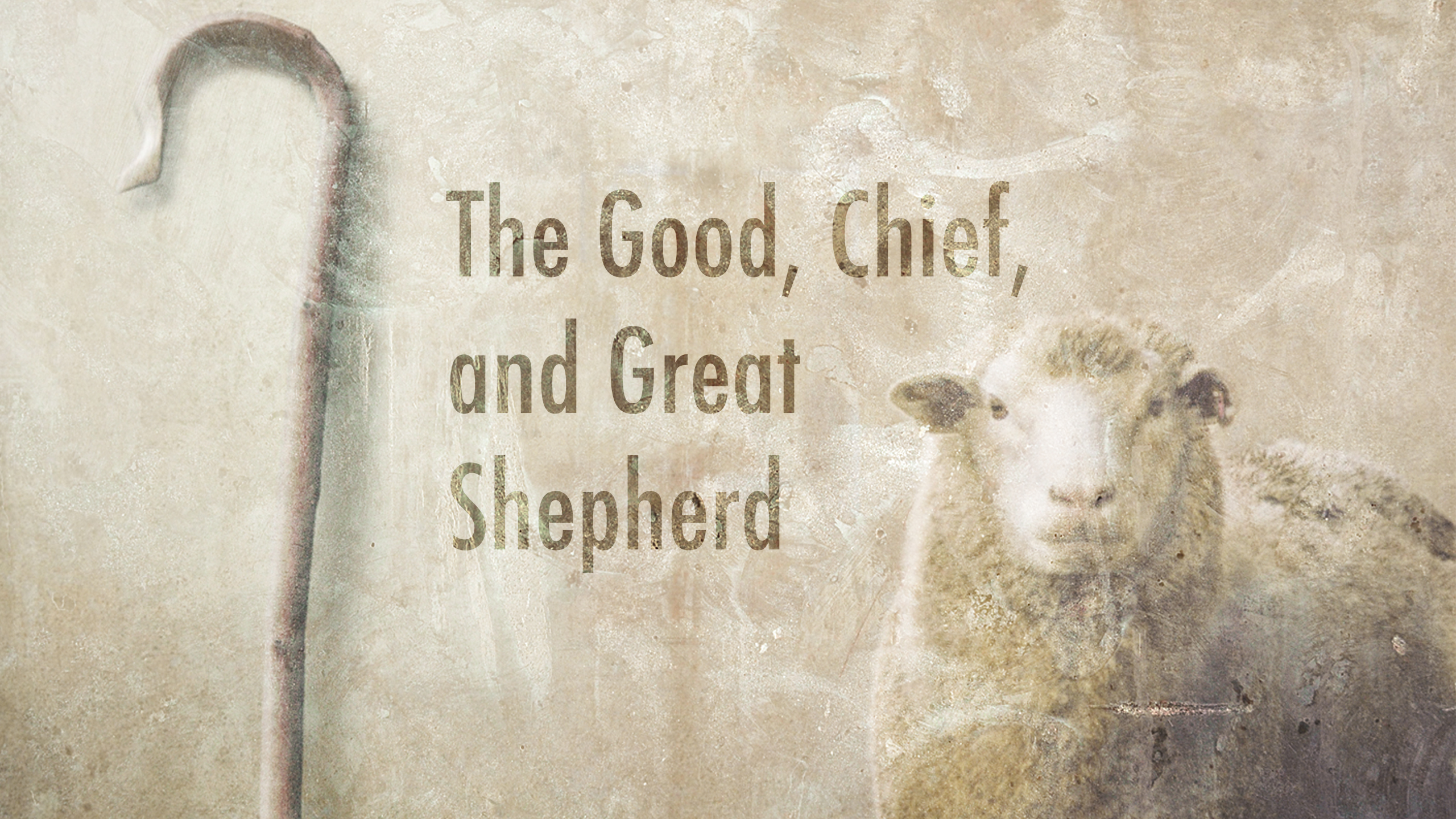 As we consider the many biblical theological themes that are unfolded throughout the Scriptures, our minds ought to be drawn to many of the passages in OT historical narrative and the prophetic literature in which we discover a synthesis of typological imagery brought under the light of prophetical fulfillment. Ezekiel 37:24-27 is one such passage. There, we find the Lord promising to raise up a Shepherd-King–under the typical name of David–to shepherd His people in the New Covenant–to dwell with them and protect them:

"David My servant shall be king over them, and they shall all have one shepherd; they shall also walk in My judgments and observe My statutes, and do them. Then they shall dwell in the land that I have given to Jacob My servant, where your fathers dwelt; and they shall dwell there, they, their children, and their children’s children, forever; and My servant David shall be their prince forever. Moreover I will make a covenant of peace with them, and it shall be an everlasting covenant with them; I will establish them and multiply them, and I will set My sanctuary in their midst forevermore. My tabernacle also shall be with them; indeed I will be their God, and they shall be My people. The nations also will know that I, the Lord, sanctify Israel, when My sanctuary is in their midst forevermore" (Ezekiel 37:24-27).

This succinct New Covenant prophecy combines the most prominent biblical-theological themes of redemptive-history (i.e. king, land, covenant, descendants, presence of God and dwelling place) in typological prospective. What is striking is that Shepherd is included among the other well known BT themes. On one hand, this ought to be surprising to us; on the other, it ought to be one of the most naturally anticipated. Consider the following biblical-theological developments regarding the Shepherd theme in Scripture:

In his departing covenantal blessing pronounced on Joseph, Jacob addressed God as being his Shepherd when he said: “God, before whom my fathers Abraham and Isaac walked, the God who has fed me all my life long to this day” (Gen. 48:15). One of the chief characteristics of a Shepherd is that he feeds his sheep. God feeds His people with the rich food of His word. He feeds us also with His own flesh and blood in the Person of His Son. In the subsequent blessing on Joseph he spoke of the coming Redeemer by the name of “the Shepherd:” Again, Jacob alludes to the LORD as Shepherd when he pronounced a covenant blessing on his son prior to his death: “But his bow remained in strength, and the arms of his hands were made strong by the hands of the Mighty God of Jacob (From there is the Shepherd, the Stone of Israel)” (Genesis 49:24).

The patriarchs are said to have been shepherds. When Joseph is speaking to his brothers about what they are to say to Pharaoh, we read: “Then Joseph said to his brothers and to his father’s household, “I will go up and tell Pharaoh, and say to him, ‘My brothers and those of my father’s house, who were in the land of Canaan, have come to me. 32 And the menare shepherds, for their occupation has been to feed livestock; and they have brought their flocks, their herds, and all that they have.’ 33 So it shall be, when Pharaoh calls you and says, ‘What is your occupation?’ 34 that you shall say, ‘Your servants’ occupation has been with livestock from our youth even till now, both we and also our fathers,’ that you may dwell in the land of Goshen; for every shepherd is an abomination to the Egyptians’ (Genesis 46:31-34). It is important to note that we are told that “every shepherd is an abomination to the Egyptians.” There may be an allusion there–by way of theological analogy–to the fact that God’s Messiah and His people would be despised by the world. Egypt was clearly a type of Satan’s kingdom. The twelve tribes were the federal heads of the Old Covenant church through whom the Redeemer would come.

When Moses asked God to raise up a replacement for himself over Israel, He did so by appealing to the figure of a Shepherd: “Let the Lord, the God of the spirits of all flesh, set a man over the congregation, who may go out before them and go in before them, who may lead them out and bring them in, that the congregation of the Lord may not be like sheep which have no shepherd.” Here, as with Abel, Joshua is a type of the greater Joshua (Jesus) who would be the Good Shepherd who leads and guides God’s people so that thy are not like sheep without a Shepherd (Matt. 9:36).

As redemptive history progressed, the next figure to typify the Lord Jesus as a Shepherd was David. In the most pronounced way, David was the greatest type of the Good Shepherd. He was the Shepherd-King of Israel, the mighty warrior and the man after God’s own heart. Interestingly, it was David who drew out the connection between the Shepherd/sheep relationship and Yahewh’s relationship to His people. Psalm 23 was David reflecting on this analogy from his own experience as a Shepherd. As was already noted in the prophecy of Ezekiel 37, Jesus is promised to come under the typical name of David. He is the Son of David, the great Shepherd of Israel.

When the Redeemer came, the Evangelists highlight the fact that the Shepherd of Psalm 23 had arrived. Mark tells us that when Jesus “saw a great crowd, and he had compassion on them, because they were like sheep without a shepherd. And he began to teach them many things” (Mark 6:43). In the parable of the sheep and the goats, Jesus explained that on Judgment Day, “All the nations will be gathered before Him, and He will separate them one from another, as a Shepherd divides his sheep from the goats” (Matt. 25:32). Jesus cited Zechariah’s prophecy about the Shepherd being struck with the sword of God’s justice when He told His disciples that they would be scattered when He was taken in judgment (Mark 14:27). Jesus gave the most explicit explanation of what it means for Him to be the Good Shepherd who gives His life for the sheep in John 10.

The continuing implications of Jesus being the Good Shepherd are seen in Peter writing, “you were like sheep going astray, but have now returned to the Shepherd and Overseer of your souls” (1 Peter 2:25), and “when the Chief Shepherd appears, you will receive the crown of glory that does not fade away” (1 Peter 5:4). The writer of Hebrews calls Jesus “the Great Shepherd of the sheep” who makes His people complete by working in them after being raised from the dead for them (Heb. 13:20-21). John Piper has put it so magnificently when he said, “Every soul needs a Shepherd.” Jesus is the Shepherd we need for our souls. He is the good, chief, and great Shepherd of the sheep.

In the New Testament epistles we also see that God has appointed under-shepherds to shepherd His people by feeding them with the pure word of God and with the preaching of the Great Shepherd of the sheep. The Apostle Paul uses this figure to explain what elders are to be–and to do–in the church. In Acts 20:28 we find Paul telling the Ephesian elders: “Therefore take heed to yourselves and to all the flock, among which the Holy Spirit has made you overseers, to shepherd the church of God which He purchased with His own blood.” In Peter 5:1-4, the Apostle Peter draws together the idea of elders being under-shepherds who are to labor now in the church until the Chief Shepherd comes. He tells us what the shepherd-elders are to do when he writes: “The elders who are among you I exhort, I who am a fellow elder and a witness of the sufferings of Christ, and also a partaker of the glory that will be revealed: Shepherd the flock of God which is among you, serving as overseers, not by compulsion but willingly, not for dishonest gain but eagerly; nor as being lords over those entrusted to you, but being examples to the flock; and when the Chief Shepherd appears, you will receive the crown of glory that does not fade away” (1 Peter 5:1-4).

Finally, we find that our Lord Jesus, in consummate glory, will be Shepherding His people for all eternity. The Apostle John tells us that in glory, “the Lamb who is in the midst of the throne will shepherd them [i.e. the redeemed] and lead them to living fountains of waters. And God will wipe away every tear from their eyes.” After all the under-shepherds have come and gone we will see that the Shepherd, who became the Lamb that was slain for the sheep, will continue to shepherd His people by giving them everlasting joy and peace in His presence. He will bring all of His flock to Himself in glorious consummation. This is the fullness of the redemptive-historical manifestation of our God as our Shepherd.